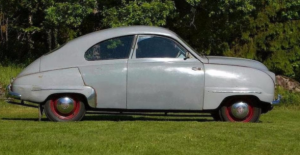 Though Saab’s automotive days are behind them, enthusiasts for the brand continue to collect, maintain, and pamper their older Saab cars. Now a prime opportunity has arisen for any Saab enthusiast, as a 1949 Saab prototype–one of three inexistence–is heading to auction in Chantilly, France.

Rather than one of the vehicles made by the company for mass production, this prototype is one of 20 originally produced between 1949 and 1950. It’s a 1949 Saab 92, and differs from the later production model in several ways. It has a trunk rear opening and larger rear window, which wouldn’t appear on production Saabs until 1952.

The Saab that’s up on the auction block was stored in a barn for nearly twenty years before it was transferred to its current owner. Though originally green, it was painted gray–the original paint shows through in a few areas. Otherwise, it is largely unmodified from its original appearance. The ninth Saab 92 ever built, it was well-maintained during its period of barn storage, but never driven. Collectors will appreciate the low kilometers, though they may want to replace a homemade rear view mirror which was added when Sweden switched to left-handed traffic in 1967. The tires were replaced by one of four previous owners, and the four rear wings were renovated. A true Saab enthusiast might endeavor to restore this prototype to its factor specifications.

Coming to auction at the Bonhams auction house, the starting bid is set at only $30,000–a steal for a collector’s car in this condition. The former owner, a farmer by the name of Torsten Johannson, is providing documentation along with the vehicle: Swedish registration papers, inspection report (1966-1980), maintenance manual, owner’s manual and five books on Saab (1948, 1956, 1983, 1987 and 1997). Johannson took possession of the vehicle in 1997; it was originally owned by Saab engineer Olaf Öhlander.